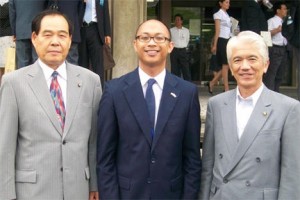 Barrister would like to congratulate Pasadena tenant, Jed Leano, for his two recent awards from the Filipino Migrant Center!  At the inaugural awards banquet on May 14th, Mr. Leano was one of three to receive this year’s Distinguished Service Award.

In addition to being given the award from the FMC, Mr. Leano received an official Certificate of Recognition award from the California State Assembly and California State Senate by State Assemblyman Mike Eng, who was in attendance and served as the keynote speaker. Other recipients of the FMC and CA state legislature awards were Chief Loa Faletogo, President of the Samoan Federation of America, and the Rosewood United Methodist Church Advocacy Group.

The Filipino Migrant Center’s vision states, “We will work for an empowered Filipino community actively engaged in the movement for local and global justice.”                 The Filipino Migrant Center is located in California which has the biggest concentration of Filipinos in the United States.  Mr. Leano has successfully fought for refugees seeking protection from torture and defended numerous victims of religious persecution and victims of domestic violence in deportation proceedings before the United States Immigration Court.